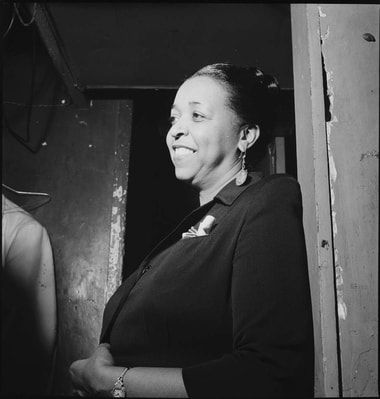 Ms Ethel Waters Credit: William P. Gottlieb/Ira and Leonore S. Gershwin Fund Collection, Music Division, Library of Congress.
In 1996, I had the pleasure of attending a cabaret show at the renowned Algonquin Hotel. The performer was Andrea Marcovicci, a TV Soap Star and Broadway actress. She presented a wonderful evening of songs that introduced me to the 1920s singer Ruth Etting, who in her "heyday" was wildly popular. Through the theatrical vision and voice of Ms. Marcovicci, she revived Ruth Etting's story and music. And I was mesmerized. I left the show that night knowing that one day, I too would develop a show that revived the story and songs of a wonderful but mostly forgotten singer. One who's career had ceased to be celebrated but still needed to be remembered. With that in mind and for close to twenty years, I searched for stories of African Americans performers who lived during the time spanning between the Reconstruction Period and the Harlem Renaissance. I looked for that one performer that begged to be remembered, and I found Ethel Waters. In her story, I see a compelling account of the universal struggles that we all share to find love, acceptance, and justice. Her brilliance as an artist was in her ability to create a personal connection with the listener. She had a stunning voice that imbued each song with a knowing emotion, a keen sense of timing and interpretive skills that are unparalleled. She is the template from which all great singing should be cut.

In developing the show, I listened to every Ethel Waters song and watched every video that was available to me via the internet and library. I read her fascinating autobiography His Eye Is On The Sparrow and took copious notes about her life and songs that she made particular note of in the book. When choosing the final songs for the show, I looked for ones that either amplified her life story or were landmarks pieces in her career. Being careful to stay away from songs that everyone knew, I looked for gems. Most of the songs chosen also resonate strongly with me. They do not fit the traditional definition of a song from the American Songbook.

My collaborator, David Budway, is an accomplished arranger and composer. He is also one of the few pianists that I know who can artfully execute the varied piano playing styles employed in this show. My partnership with him has been vital to recreating Ms. Waters' irresistible musical arrangements. Additionally, cabaret director Gerry Geddes worked closely with us to shape the dialogue and overall direction of the work.

"I Got Rhythm: An Evening with The Incomparable Ethel Waters" is a one-woman show featuring the signature songs and innovative arrangements of America's first black superstar. The main focus of the show is to draw the audience into the fascinating life story of Ethel Waters, the highest-paid performer of her time - black or white. Loosely following the highs and lows in her journey to greatness, the show also draws attention to some of the racial and cultural biases that were prevalent at that time. Moreover, through music, the audience is not only entertained but is also prompted to consider how these issues still prevail today.

Unique to the show are songs like Throw The Dirt. Beautifully underscored by music, this song employs the spoken word and occasional leaning in of the melody to get it's point across. Other songs like Man Wanted and Frankie and Johnny spotlight Ms. Waters humor and incredible storytelling prowess. Rarely performed songs like "Little Black Boy" and "Underneath the Harlem Moon," give special attention to the African- American Experience.

This show is easily enjoyed by anyone 16 years of age and older. When analyzed for its use of 1930s slang and coded language, it could easily be employed to introduce students to the social and political life of African Americans living in the 1930s.​

For years I searched for a story that begged to be told, and for an artist worthy of being celebrated and remembered. I found Ethel Waters and "I Got Rhythm: An Evening with The Incomparable Ethel Waters" is her story.